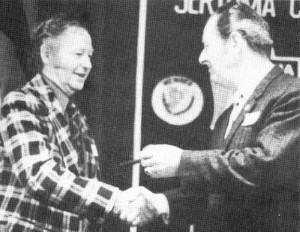 At a festive banquet on 3 May 1975, Frank Ulrich, Governor of the South Colorado Sertoma District, presented the official Charter, dated 25 April, to the founding members of the Woodmen Valley Sertoma Club.  Bob White, the club’s first President and “Founding Father,” accepted the Charter on behalf of the forty new members who had been recruited for the startup chapter. A large group of Sertomans from the Monument Hill and Pikes Peak Sertoma Clubs attended, they having organized the new club and recruited its charter members.

The Monument Hill Sertomans had focused their club building efforts in the developing part of town between  Garden Of The Gods Blvd and the Air Force Academy, bounded on the east by Academy Blvd. This included the earliest neighborhoods in Rockrimmon, sparsely populated Woodmen Valley and the recently built tracts either side of East Woodmen Road.  In the mid-1970s, many residents in this area were either active-duty military or recently retired from service.  Hence, it is not surprising that a goodly number, though not all, of Woodmen Valley’s first members came from military backgrounds.

Listed below are the Charter Members of Woodmen Valley Sertoma Club.

Under Bob White’s strong leadership in the first year and that of his successors, Woodmen Valley rapidly established a record of service to the community consistent with the highest ideals of Sertoma.  As documented in club newsletters and an article in the Northern Light Newspaper in October 1984, “The main thrust of the Club is to contribute time and effort, NOT money.” Some of these early service programs and projects were:

Woodmen Valley’s first priority in the early years was hands-on service, but it was not long before they also developed a Sponsorship Program for making philanthropic grants to worthy nonprofit programs and charities.  Consistent with sponsorship goals and priorities of national Sertoma, the club dispersed funds in three broad categories:  1) Speech and Hearing, 2)Youth, and 3) Service To Mankind. Here is partial list of grant recipients during this period:

To fund its service projects and philanthropic giving, the club raised money through a number of initiatives in the early years.  Whenever practical, these moneymakers were designed to put the entire membership to work:

Traditions Of Fun and Fellowship

During the early years, our leaders started a number of social events to get the members and their families together for fun and fellowship.   Some of these events have become traditions over our 40-year history and are now perennial entries on the club calendar.